Hobbs and Steel Headed Back to Regina 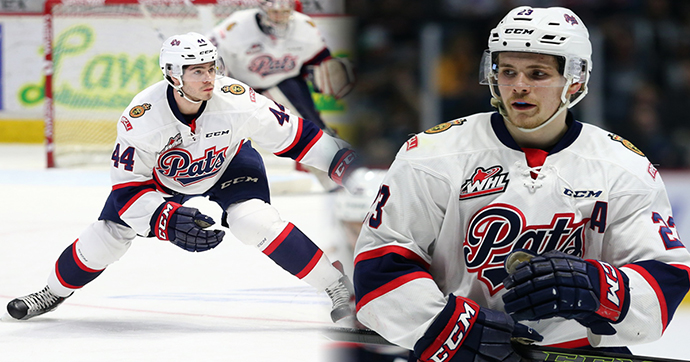 Regina Pats forward Sam Steel and defenceman Connor Hobbs have been reassigned to the club by the Anaheim Ducks and Washington Capitals respectively.

Hobbs, a fifth round pick of the Capitals in 2015, was signed by Washington this summer. He played in one NHL pre-season game, on Tuesday, against Montreal recording an assist. In 58 games with the Pats last season, the Saskatoon, SK product scored 19 times and added 22 assists to go along with 106 penalty minutes.

Sam Steel is a first round pick of the Anaheim Ducks in 2016, appearing in one NHL pre-season game. The Sherwood Park, AB native played 14:41 minutes, winning 27% of his face-offs against the L.A. Kings on Wednesday. Steel was the Pats second leading scorer with 70 points in 2015/16 adding 16 points in the playoffs.

With the return of Hobbs and Steel, Adam Brooks (TOR) and Austin Wagner (LAK) are the only Pats who remain with their NHL teams.

The Pats kick off a five game home stand Friday, against the Edmonton Oil Kings at 7 p.m. from the Brandt Centre.