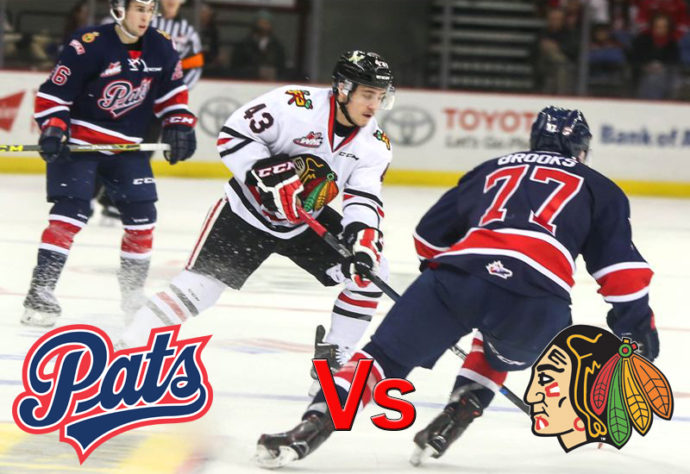 The Regina Pats (4-0-2-0) wrap up their five game home stand on Wednesday night against the Portland Winterhawks (6-3-0-0). Puck drop from the Brandt Centre is at 7 p.m. The Pats won their last contest at home to Brandon on Saturday night 5-2. The Winterhawks were in Brandon Tuesday night and came away with a 7-5 victory. Tonight’s game can be heard on 620 CKRM with Bennett Dunlop Ford Pats Hockey beginning with the pre-game show at 6:35 p.m.

Lead Up: Pats Overcome Early Deficit but Fall in OT to Kootenay
The Pats powerplay scored twice and Sam Steel had three points in a 5-2 victory over the Brandon Wheat Kings on Saturday night. The Pats saw three others, Dawson Leedahl, Jake Leschyshyn and Connor Hobbs record two point nights. Braydon Buziak also recorded his fifth goal of the year in just the sixth game of his WHL career. Tyler Coulter and Ty Lewis scored for the Wheat Kings in the loss. Tyler Brown stopped 18 of 20 shots faced and the Pats improved to 4-0-2-0 on the season.

Brooks Is Back
The Pats got some good news on Monday from the Toronto Maple Leafs. Forward Adam Brooks was returned to the Pats after spending the last four weeks with the Maple Leafs and Marlies training camps. Brooks won the Bobby Clarke Trophy as the WHL leading scorer in 2015/16 with 38 goals and 82 points for 120 points. Brooks will make his season debut tonight against the Portland Winterhawks.

Leedahl Rolling
Pats overage forward Dawson Leedahl is off to a great start to his final WHL season. The Saskatoon product has a point in every game to start the year (2G 6A). The six game point streak is tied for the league lead to this point in the season. Leedahl, though a small sample size, is on pace for a 96 point season. His previous career high in points was in 2014-15 when he had 33. In six games this year, Leedahl has one shorthanded goal, one on the powerplay and a game winner.

Powerplay Streak
The Pats powerplay continues its torrid pace to start the year. In six games, the club has scored nine times in 30 opportunities. The Pats have scored at least once on the powerplay in every single game this year. The 30 per cent efficiency is fifth in the WHL.

Goals Galore
The Pats have scored 28 goals through the first six games of the year, an average of four per-game. Four times the Pats have scored five or more in a game this season. Twice they have scored just three times, both those resulted in overtime losses. Sam Steel and Braydon Buziak lead the team with five goals each while Jake Leschyshyn is close behind with four.