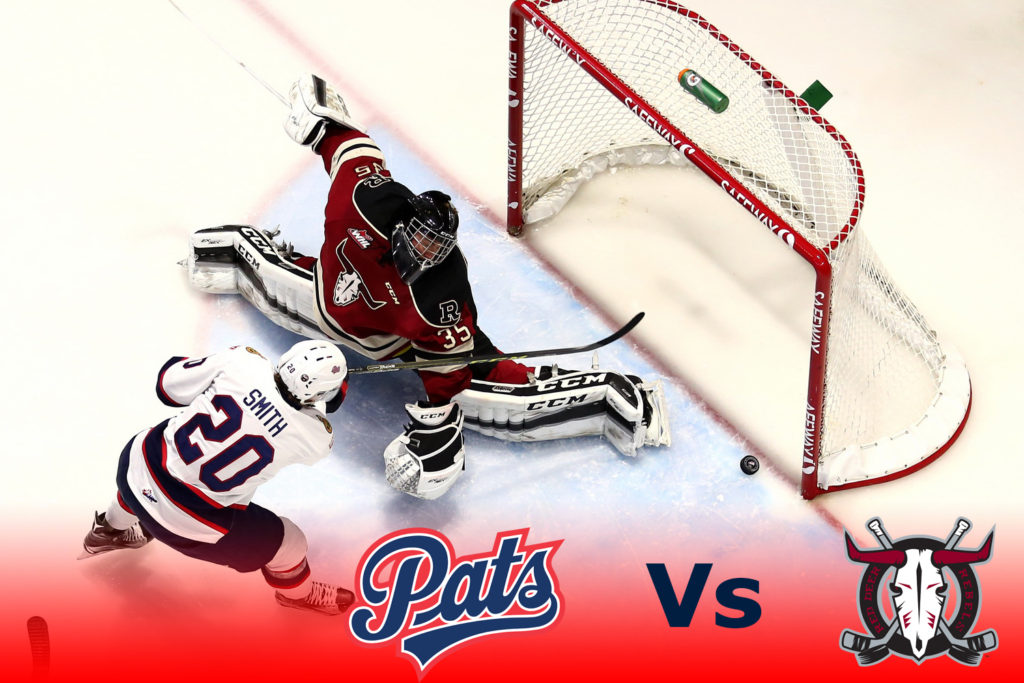 The Regina Pats (2-0-1-0) play the second of five straight on home on Sunday afternoon against the Red Deer Rebels (1-1-1-1). Puck drop from the Brandt Centre is at 4:00 p.m. The Pats are coming off a 6-3 win over Edmonton on Friday. The Rebels meanwhile are playing their third game in as many nights and have a 1-1-0-0 record so far on the weekend. This game is the first meeting between the two clubs since their second round playoff series last year which the Rebels won in seven games. Tonight’s game can be heard on 620 CKRM with Bennett Dunlop Ford Pats Hockey beginning with the pre-game show at 3:35 p.m on 620 CKRM.

Lead Up: Steel Returns to Push Pats past Edmonton.
The Pats used a bolstered roster on Friday to down the Edmonton Oil Kings, 6-3 at the Brandt Centre. Sam Steel scored twice in his season debut and was one of four Pats to record two point nights in the win. Jordan Hollett made 34 saves and improved to 2-0-0-0 on the young season. The Pats hit the 40 shot mark for the third time in three games to start the year, outshooting the Oil Kings 42-37.

Wagner Is Back
Another Pat has made his way back to Regina from NHL training camp. Saturday the L.A. Kings reassigned forward Austin Wagner to the club. Wagner was drafted in the fourth round of the 2015 NHL Entry Draft and has completed his second training camp with the Kings. Wagner, a product of Calgary Alberta, is entering his fourth season with the Pats. He set career highs last year in games played (70), goals (28) and points (62). With Wagner’s return, just Adam Brooks remains away from the team with the Toronto Maple Leafs.

Immediate Impact
The Pats got three guys back from NHL camps ahead of Friday’s home game. The aforementioned Sam Steel scored twice in the contest and was a plus 2. Defenceman Sergey Zborovskiy was solid in his first game of the year as well. He picked up an assist and was an incredible plus 4. Connor Hobbs also made his season debut in the win.

Three for Three
Pats forward Braydon Buziak continued his goal a game pace on Friday night against Edmonton. The 18-year-old has scored in each of his first three games in the WHL. He leads the Pats with those three markers and is a plus two. Buziak extended his goal streak on his first shift of the game on Friday when Robbie Holmes stole a puck on the fore-check, centered for Buziak who just squeaked a shot through goaltender Patrick Dea to give the Pats the 1-0 lead.