GAME PREVIEW: Pats Hit the Road to Take on Kootenay 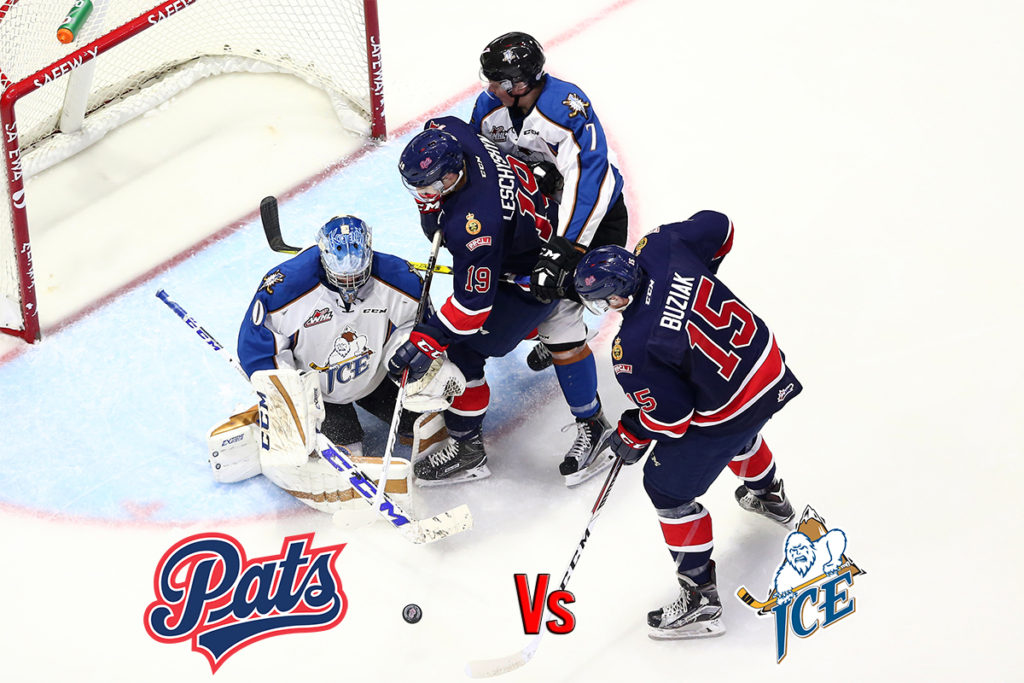 The Regina Pats (4-0-3-0) kickoff a two game road swing through the Central Division on Friday night in Cranbrook B.C. against the Kootenay ICE (1-5-1-1). Puck drop is at 7 p.m. The Pats dropped another overtime decision on Wednesday, 5-4 to the Portland Winterhawks at the Brandt Centre. The ICE were last in action on Monday when they lost in Swift Current 4-3. Kootenay won the first meeting with the Pats, a week ago Friday, 4-3 in overtime. Tonight’s game can be heard on 620 CKRM with Bennett Dunlop Ford Pats Hockey beginning with the pre-game show at 6:35 p.m.

Lead Up: Pats Finish Home Stand with OT Loss
The Regina Pats lost the last game of their five game home stand, 5-4 in overtime to the Portland Winterhawks on Wednesday. The two teams combined for 103 shots in the contest. The game was tied 1-1 after 40 minutes but the Hawks scored twice in just over 30 seconds to lead 3-1 early in the third. The Pats stormed back with three unanswered to go ahead 4-3. However late in the period, Portland tied it on the powerplay and then in overtime Caleb Jones won it with 55 seconds left on the clock. Sam Steel, Adam Brooks and Filip Ahl led the Pats with two points each while goaltender Tyler Brown made 46 saves.

Brooks Starts Right
Pats captain Adam Brooks got off to a good start in his final WHL season on Wednesday. The overage forward from Winnipeg scored twice in his debut against Portland. Brooks had missed the first six games of the season while at training camp with the Toronto Maple Leafs and Toronto Marlies.

Streaking
Jake Leschyshyn was held off the score sheet in two of the Pats first three games of the year. However in the four games since, the 17-year-old has scored twice and has six assists. In total, Leschyshyn is up to 11 points on the season, with four goals and seven assists. That is tied for eighth among all WHL skaters. Sam Steel has a two game point streak going (2G 3A) and his 12 points total is tied third in WHL scoring. Filip Ahl has points in two straight as well (2G 1A). Ahl is up to seven points on the year, tied second among all rookies.

Zborovskiy Leading the Way
Pats defenceman Sergey Zborovskiy is at the top of the WHL in plus/minus to this point in 2016/17. The signed New York Rangers prospect, in five games this year, is a plus 10. Zborovskiy has been a plus in every game he has played, the highest coming on September 30th against Edmonton when he went plus four. Sergey also has a point in all five games (1G 4A).