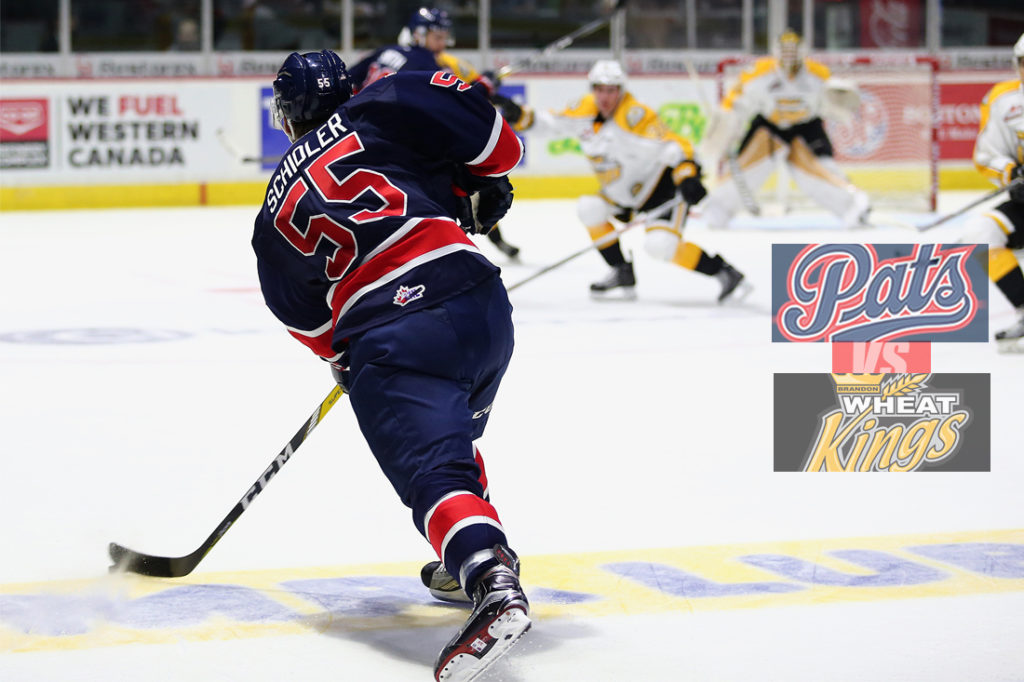 The Regina Pats (0-1-0-0) kick off their home schedule for the 100th Anniversary Season on Saturday night against the Brandon Wheat Kings (1-0-0-0). Puck drop is at 7:00 p.m. at the Brandt Centre. The Pats dropped an 8-1 decision in Brandon to open the regular season on Friday night. Tonight’s game can be heard starting at 6:35 with Bennett Dunlop Ford Pats Hockey on 620 CKRM.

The Lead Up: Pats lose 8-1 in season opener Friday
The Regina Pats dropped the opening game of the 2017-18 season in Brandon on Friday night, 8-1 to the Wheat Kings. Ty Lewis led the home side with two goals and three assists while Stelio Mattheos and Cole Reinhardt chipped in with two goals of their own. Matt Bradley scored the lone goal for Regina late in the first on the powerplay. The Regina powerplay was one for five while the penalty kill went two for five. Tyler Brown and Max Paddock combined to make 37 saves in the Regina goal as the Wheat Kings outshot Regina 45-34.

Bradley On the Board
Overage forward Matt Bradley scored in his regular season debut with the Pats on Friday night in Brandon. The Surrey, BC product got a point shot to go off the shoulder of Logan Thompson and in on the powerplay late in the first period for the Pats lone goal. Bradley, an invite to Minnesota Wild training camp in 2017, put up 34 goals and 77 points in 70 games last year with the Medicine Hat Tigers.

WHL Debuts
Four Regina Pats played in their first WHL game on Friday night in Brandon. Defencemen Egor Zamula and Parker Gavlas as well as forwards Emil Oksanen and George King made their league debuts. Oksanen picked up an assist in his first ever game on Matt Bradley’s powerplay goal. Beyond those four, the Pats roster included three other rookies in Logan Nijhoff, Owen Williams and Max Paddock who had a combined eight games of WHL experience entering Friday.

Opening Night Woes
The Pats suffered their sixth straight opening night loss on Friday night. The last time the organization won its first game of the season was in 2011 against the Swift Current Broncos. However in each of the last two seasons, the club has bounced back to win game number two. Last year the club won in Prince Albert after dropping the first game of the year in overtime and in 2015-16 the Pats came back home to beat the Moose Jaw Warriors in overtime.