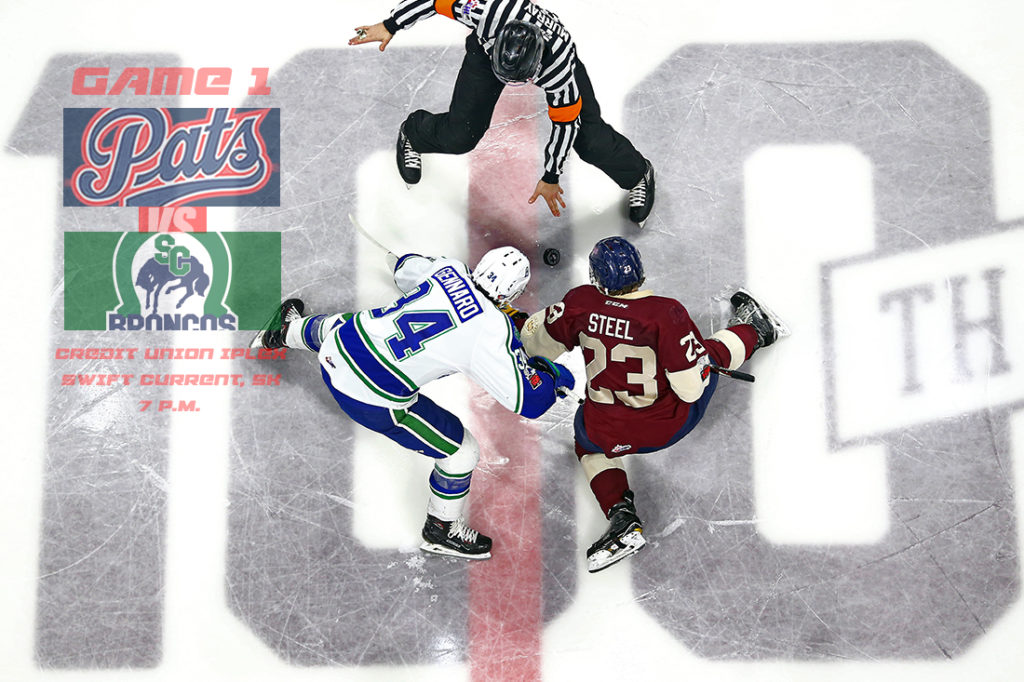 The Regina Pats (0-0) kick off the 2018 WHL Playoffs on the road Friday night against the Swift Current Broncos (0-0). Puck drop is at 7 p.m. at Innovation Credit Union Iplex. The Pats and Broncos ended the regular season on Saturday night in Swift Current with Regina falling 3-2 in overtime. Tonight is game one of the best-of-seven series, The Pats went 1-4-1-0 against the Broncos during the 2017-18 regular season. The game can be heard starting at 6:35 with Bennett Dunlop Ford Pats Hockey on 620 CKRM. The game will also be broadcast on Access 7.

The Lead Up: Pats close regular season with OT loss in Swift Current
The Regina Pats finished the regular season with a 3-2 overtime loss in Swift Current on Saturday night. Regina opened the scoring when Aaron Hyman put home a rebound for his third of the year. The Broncos tied it up 48 seconds later and it was 1-1 after one. The Pats regained the lead in the second when Jared Legien ripped a shot from the right circle into the top of the net for his 23rd. Again the Broncos tied it and it was a 2-2 game after two. The two clubs eventually went to overtime tied at two and 32 seconds into the extra frame Tyler Steenbergen won it for the Broncos in a 3-2 final.

Head to Head
The Pats went 1-4-1-0 against Swift Current during the 2017-18 regular season. The Broncos outscored Regina 20-12 in the six games. The Pats went five for 24 on the powerplay in the season series and the penalty kill was 20 for 28. Cameron Hebig put up 12 points against Swift Current this year, 11 as a member of the Saskatoon Blades. Matt Bradley had seven points and Cale Fleury four points. The Broncos were led by Glenn Gawdin, Aleksi Heponiemi, Tyler Steenbergen and Matteo Gennaro who had eight points against Regina.

Familiar Foes
The Pats and Broncos meet in the WHL post season for a second consecutive year and for the third time in the last four seasons. Regina has won two straight playoff series against their division rivals and have won five of the eight previous meetings in the franchise’s history. The Pats won series’ over Swift Current in 1974, 1990, 2007, 2015 and 2017 while the Broncos claimed series’ in 1988, 1993 and 2008. Regina has 22 playoffs wins against the Broncos in their history. Swift Current has 15 playoff wins against Regina.

Playoff Experience
The Pats have a total of 316 games of playoff experience on their roster heading into game one. Josh Mahura leads the way with 45 playoff games played, Matt Bradley is next with 38 while Sam Steel has 37 games. Steel leads the way in career playoff scoring with 17 goals and 29 assists for 46 points, Mahura is next with 26 points and Jesse Gabrielle has 15 points. 16 of the Pats 26 players have played at least one playoff game, 10 will potentially make their playoff debuts.