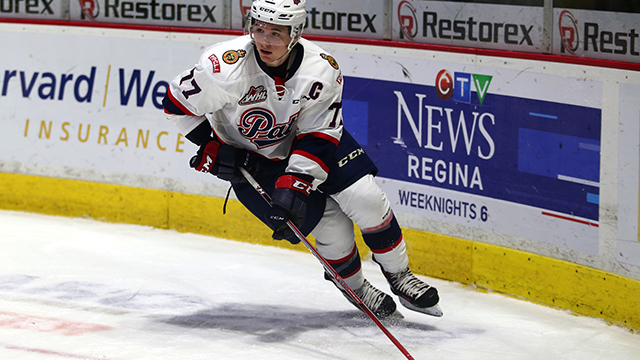 Brooks, a 21-year-old product of Winnipeg, was selected by the Maple Leafs during the fourth round (92nd) of the 2016 NHL Draft and completed his WHL career this May as the Pats fell to the Seattle Thunderbirds in an exciting six-game WHL Championship Series.

The 5-foot-11, 176-pound Brooks wrapped up his five-year WHL career with back-to-back calls to the WHL Eastern Conference First All-Star team, being recognized for both the 2015-16 and 2016-17 campaigns.

During 2015-16, the shifty centre registered a career-high 120 points (38G-82A) over 72 games to lead the WHL in scoring, earning the Bobby Clarke Trophy for his efforts. After an abbreviated stay in the professional ranks, Brooks returned to Regina in 2016-17, captaining the Pats to a Scotty Munro Memorial Trophy as WHL Regular Season Champions while eclipsing his previous career high by collecting 130 points (43G-87A) in only 66 games.

Enduring injuries through the 2017 WHL Playoffs, Brooks added another 18 points (5G-13A) in 17 post-season games as the Pats represented the Eastern Conference in the battle for the Ed Chynoweth Cup.

Selected 25th overall in the second round of the 2011 WHL Bantam Draft, Brooks provided exceptional value for the Pats through his five years in the Queen City, accruing 335 points (119G-216A) in 317 career regular season outings. He added another 49 points (16G-33A) in 42 career playoff games with the Pats.

The @MapleLeafs have agreed to terms with forward Adam Brooks on a three-year entry level contract. #TMLtalk