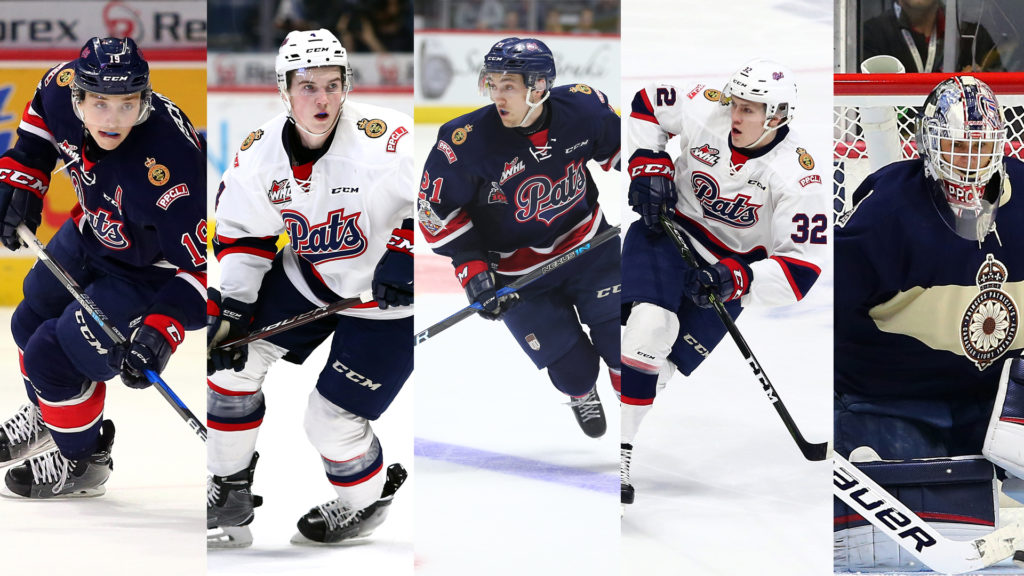 The Regina Pats Hockey Club is pleased to announce that five members of the team are headed to NHL training camps on Wednesday.

Leschyshyn will be taking part in his second camp with the Knights. A second round pick, Leschyshyn signed a three-year entry level contract with Vegas in June of 2018. The 19-year-old had 18 goals and 40 points with the Pats last season and added three goals and five points in seven games in the 2018 playoffs.

Fleury is off to his second camp with the Canadiens. The overage defenceman was drafted in the third round of the 2017 NHL Entry Draft. Fleury was acquired by the Pats from the Kootenay ICE last season and put up 12 goals and 51 points in 68 games.

Henry, a fourth round pick of the Colorado Avalanche in 2017, will play in his first training camp with the Avalanche. The 19-year-old missed last year’s camp with injury and the start of the Pats regular season. The product of Portage la Prairie, MB has 49 goals and 110 points in 125 games in his Pats career.

Robbie Holmes will be attending his first NHL training camp this week. The 19-year-old was a free agent camp invite by the Avalanche. Holmes is coming off a career year where he scored 16 goals and had 29 points in 68 games. He added another two goals and two assists in the playoffs. Holmes also attended summer development camp with the Avalanche this summer.

Max Paddock is also a free agent camp invite by the San Jose Sharks. The Brandon, Manitoba product is coming off a strong season where he went 19-7-1-1 with the WHL’s third best goals against average of 2.90 and a .904 save percentage. The 18-year-old was named to the Memorial Cup All-Star team after a strong performance in the tournament, going 3-1 with a .908 save percentage.

The Pats continue the 2018 preseason on Friday in Brandon against the Wheat Kings at 6:30 Regina time. They will return home to host the Wheat Kings on Saturday at 7 at the Brandt Centre. Tickets are $10 at the door.