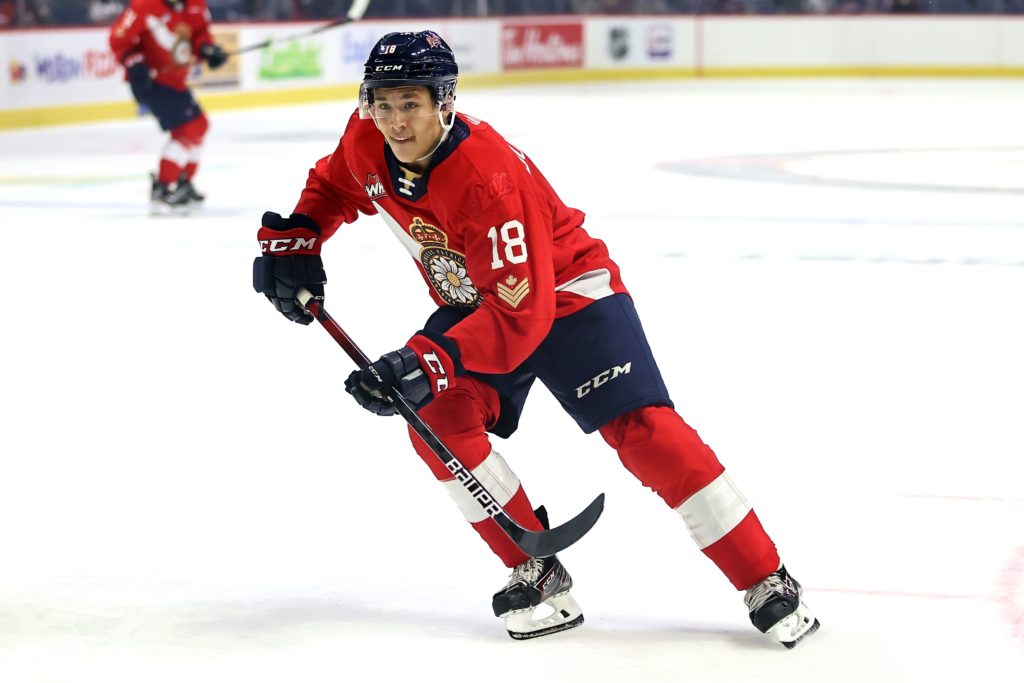 Regina, Sask. — There’s no doubt in anyone’s mind that Regina Pats forward Cole Dubinsky is breaking out this season.

The 19-year-old is off to his best start in his WHL career, having recorded at least a point in eight straight games, the second-longest active streak in the league. He has goals in three straight contests, is leading the Pats in scoring with nine points and is tied for first in goals with four.

This past summer, Dubinsky spent time in Vernon, B.C., working with Joel Becker and Jason Podollan to prepare for the 2021-22 season in a much different fashion than in years past. Becker is a Speed Development Specialist for Game Changers, and Podollan runs Up My Hockey, which focuses on high performance mindset training, built on the foundation of his experience: grit, resilience, determination, successes, adversity and failures. Dubinsky credits both for his strong start to the season.

“It was a completely different training routine [this summer],” Dubinsky said. “I focused a lot more on the mental side of it rather than the physical side of it, as I was always a guy who came in shape. I wanted to come in with a good mindset and I feel better on the ice. My mindset is a lot better and it’s been paying off.”

The 5-foot-10, 185 pound winger also credits his teammates and ice-time for his success this season.

“Hockey is a team sport and if you don’t have teammates, you’re not going to do anything and that doesn’t matter who you are,” Dubinsky added. “There’s lots of talent on our team and playing with Connor [Bedard] is awesome. Nobody can do it by themselves. You’ll never hear me say I can do it without my teammates, because you can’t.”

Regina Pats Head Coach Dave Struch credits Dubinsky’s ability to simplify things, pointing out that his play without the puck has rewarded his play with it.

In pre-season action, Dubinsky was tied for first in the WHL in points with 10, while ranking second in assists (six) and third in goals (four). Last season, the veteran forward totalled 14 points in 21 games, after scoring 22 points in 58 games the year prior.

“He came in with high expectations,” added Struch. “He takes pride in his game, he’s a very intense young man — there’s now question about that. I think he’s playing intense right now, with and without the puck. We expect that from him. We expect him to be that way night in and night out.”

The Ardrossan, AB, native also spent a lot of time in the outdoors this off-season, enjoying his second passion: hunting.

“I grew up…out in the country and I love the outdoors,” said Dubinsky. “Most of my time when I’m not at the rink, I’m outdoors. It’s just been something that has been passed on through my family.

“It’s really quiet and peaceful and it just gives you a lot of time to think. You’re just out there. There’s no distractions; no nothing.”

Originally selected in the fourth round of 2017 WHL Prospects Draft, Dubinsky played at three different hockey academy’s prior to joining the Pats. He played his U-15 hockey at both the Okanagan Hockey Academy in Penticton, B.C. —  where he played alongside current Pats captain Logan Nijhoff — and and OHA Edmonton, where he was teammates with current WHLers like Colton Dach, Kaiden Guhle, Owen Pederson and Sean Tschigerl.

Following a 30-point season (14G-16A in 22 GP) at OHA Edmonton, Dubinsky was drafted by the Pats, later deciding to attend Delta Hockey Academy in Vancouver, B.C., where he scored seven goals and registered 30 points in 34 contests for their U-18 prep club.

“For me, their program was always really good and I knew a whole bunch of guys on the team,” said Dubinsky. “They were going to have a real good team that year and I thought it was the right thing for me at that time. It was a huge step.”

This is Dubinsky’s fourth full season with the Regina Pats after he made the team as a 16-year-old prior to the 2018-19 season. After signing on August 31, 2017, Dubinsky was called up for five games during the 2017-18 season as a 15-year-old, recording two assists. He made his debut on December 28, 2017 at the Brandt Centre against the Brandon Wheat Kings.

“I still remember every game like it was yesterday,” said Dubinsky. “You’re coming up and you’re a young guy and you’re playing with these guys, and this team is really good. They’re going into the Memorial Cup that year and the atmosphere was just crazy. It was surreal at the time. It was so fun and hard to explain.”

Suiting up alongside Sam Steel, who Dubinsky had known since he was six years old, was a unreal experience. But Dubinsky’s favourite moment of his hockey career was the 2019 Prairie Classic, played outdoors at Mosaic Stadium on Sunday, October 27, 2018 against the Calgary Hitmen.

“It was really cool, especially for me because I grew up always skating on the outdoor rink,” said Dubinsky. “It was nice and cold, like minus-20, and I like it better. There’s something about it, as that’s how I grew up. Who would have thought you’d be playing a game in the WHL skating outside, it’s crazy.”

While the Prairie Classic was Dubinsky’s favourite on-ice outdoor moment, he had a pretty cool hunting moment last year as well.

“I shot a moose last year with my bow at like 60 yards,” he said. “That was probably my coolest experience hunting.”