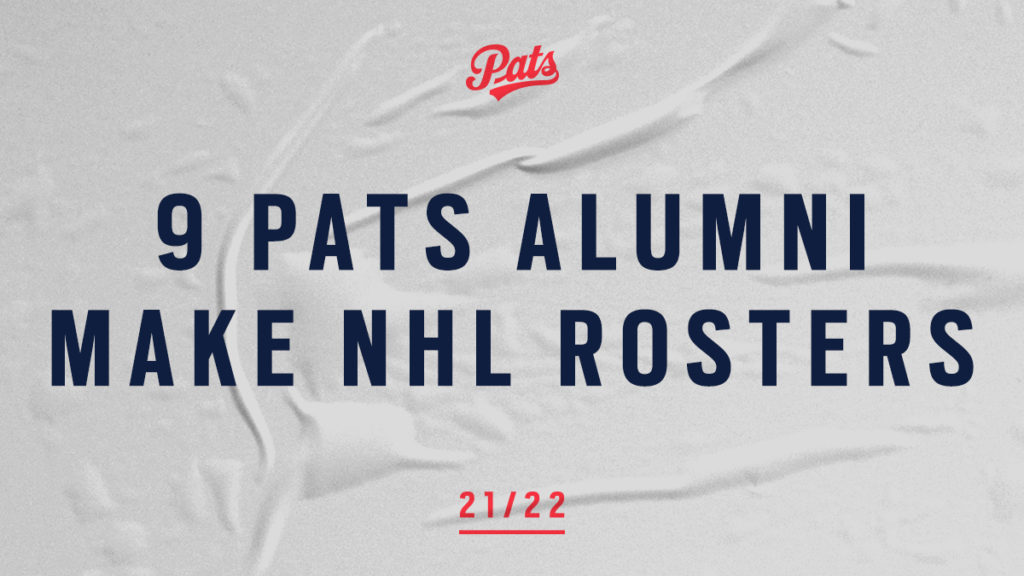 Regina, Sask. – The Regina Pats would like to congratulate nine Pats alumni who have cracked opening-night NHL rosters:

Brooks, 25, was claimed off waivers by the Habs from the Toronto Maple Leafs, Monday. This comes after he spent the last four seasons with the Leafs organization, suiting up in 18 NHL games, posting four goals and four assists. The Winnipeg, MB, native played for the Pats from 2012-2017, scoring 119 goals and 335 points in 317 WHL games.

Kyle Burroughs, 26, signed a two-year contract with the Canucks this offseason, and cracks and opening night NHL roster for the first time in his career. Last season, 6’0” 194 pound defenceman appeared in five NHL games with the Colorado Avalanche after five seasons in the AHL. The Vancouver, B.C. native captained the Pats for two seasons, from 2013-2015.

Eberle, 31, was taken by the Seattle Kraken in the expansion draft after four seasons with the New York Islanders. Recently named an alternate captain for the Kraken, the 11-year NHL veteran is coming off a season with the Islanders where he scored 33 points in 55 games. The Regina, Sask. native played for the Pats from 2006-2010 and has his #7 retired by the franchise.

Hajek, 23, played an NHL career high 58 games for the Rangers last season. The Smrcek, CZE, native was spent half of the 2017-18 season with the Pats, scoring 14 points in 25 games before joining the Rangers organization for the 2018-19 season.

Hunt, 25, inked a two year contract with the New York Rangers this summer after splitting the last four seasons with the Arizona Coyotes and Florida Panthers. The Cranbrook, B.C. native scored three goals and eight points in 26 games last season with Arizona. He played for the Pats from 2011-2015, scoring 40-plus points in his final two seasons with the club.

Knyzhov, 23, begins the season on the injured list following a 2020-21 season where the Kemerovo, RUS, native was named the Sharks Rookie of the Year, recording 10 points (2G-8A) in 56 games. The the 6-foot-3 203 lb. defenceman played 19 games with the Pats during the 2015-16 season before heading to Russia prior to the Sharks.

Mahura, 23, was part of the Pats run to the league final (2016-17) and Memorial Cup (2017-18) and begins his fourth season with the Ducks organization, as he has split time between the NHL and AHL. The St. Albert, Alta. native was traded to the Pats during the 2016-17 season, and produced 22 goals and 69 points in his final season with the club.

Steel, 23, just like Mahura, was also part of those Pats teams that went to the league final and Memorial Cup. The Sherwood Park, Alta. native begins his third straight season at the NHL level with the Ducks. He scored 50 goals and 131 points in the 2016-17 season and captained the Pats during the 2017-18 season.

Stephenson, 27, is back for a third season with the Vegas Golden Knights after he spent five seasons of pro hockey with the Washington Capitals organization, winning the Stanley Cup in 2017-18. The Saskatoon, Sask. native spent four seasons with the Pats, producing 89 points in his final season.