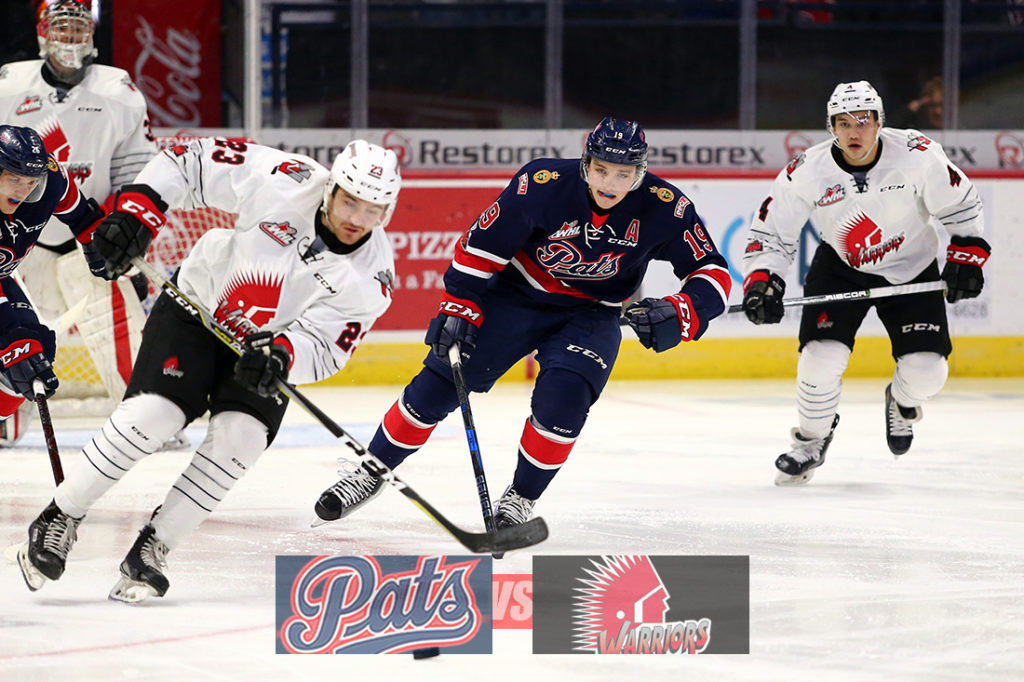 The Regina Pats (24-19-4-0) carry a three game winning streak into Friday night’s game at home to the Moose Jaw Warriors (36-7-1-2). Puck drop is at 7:00 p.m. at the Brandt Centre. The Pats were last in action on Wednesday, picking up a third straight win, 4-3 in Prince Albert. The Warriors last game was Sunday when they beat Medicine Hat 5-4 in OT. Tonight is the fourth of eight meetings between the two clubs in 2017-18, The Pats hold a 0-2-1-0 record so far in the season series. The game can be heard starting at 6:35 with Bennett Dunlop Ford Pats Hockey on 620 CKRM.

The Lead Up: Pats outlast Raiders in Prince Albert Wednesday
The Regina Pats picked up a third straight win on Wednesday night, 4-3 in Prince Albert over the Raiders. The Raiders led 1-0 after a powerplay goal five minutes into the first, but Jake Leschyshyn would tie it up with his 15th of the year and it was 1-1 after one. In the second, the Raiders made it 2-1 off the stick of Curtis Miske, but 25 seconds later Matt Bradley tipped home his 28th and it was 2-2 after 40 minutes. In the third, Matt Bradley would score on the powerplay, his second of the night, 29th of the season, and Regina had their first lead at 3-2. On another powerplay, Jesse Gabrielle added to the lead with his third of the year and it was a 4-2 game. P.A. got one back late but Regina held on from there for the 4-3 win.

Head to Head
Tonight is the fourth of eight meetings between the Pats and Warriors, Regina is 0-2-1-0 in the season series. Sam Steel, Josh Mahura and Emil Oksanen each have four points against Moose Jaw while Matt Bradley has chipped in with two points. The Warriors Jayden Halbgewachs has put up six points against Regina while Oleg Sosunov and Jett Woo each have three points.

Second Half Success
The Pats have enjoyed their best stretch of the season since returning from the Christmas break. In the 11 games since, the club has put up a record of 8-2-1-0, picking up 17 of a possible 22 points in the standings. Regina has outsored their opponents 42-31 in the 11 games and the penalty kill turned a big corner going 86 per cent, 43 for 50 with three shorthanded goals. Matt Bradley leads the club with seven goals and eight assists in that stretch, Josh Mahura has 13 points, Cale Fleury 11 and Jake Leschyshyn and Jared Legien each have 10 points since the break.

Pats Extend Hockey Operaions Staff
The Pats announced Thursday they have signed Head Coach and GM John Paddock, Assistant Coach and Assistant GM Dave Struch and Assistant Coach Brad Herauf to multi-year contract extensions. Paddock joined the Pats ahead of the 2014-15 season as Head Coach and General Manager. He has guided the Pats to a record of 149-83-19-12 in three plus seasons. Struch has been with the club since 2014-15 and Herauf joined the team ahead of the 15-16 season.