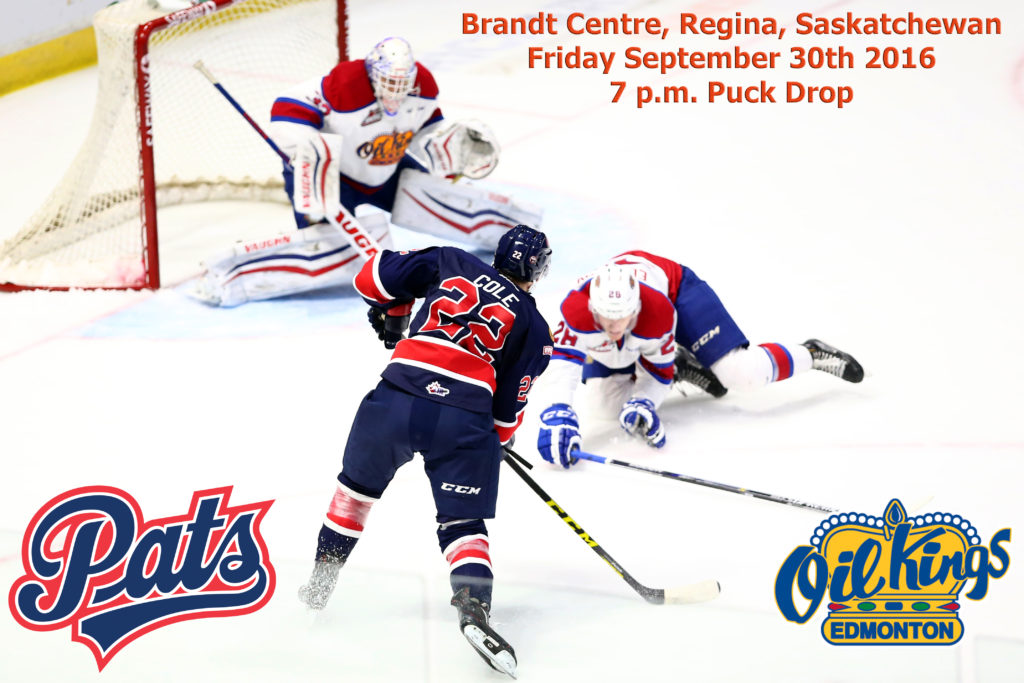 The Regina Pats (1-0-1-0) kick off a five game home stand tonight against the Edmonton Oil Kings (2-0-0-0) at the Brandt Centre (7:00 p.m.). The Pats started the season with a win and an OT loss to the Prince Albert Raiders last weekend. The Oil Kings meanwhile, swept their home and home with the Red Deer Rebels. Tonight’s game can be heard on 620 CKRM with Bennett Dunlop Ford Pats Hockey beginning with the pre-game show at 6:35 p.m.

Lead Up: Jake Leschyshyn Leads Pats to 1st Win.
The Pats got two goals and an assist in Prince Albert on Saturday night and beat the Raiders 4-2 to improve to 1-0-1-0 on the year. The Pats took a 1-0 lead midway through the first only to see the Raiders score two unanswered to go up 2-1. The Pats powerplay drew them even on Lane Zablocki’s first of the year and then Braydon Buziak gave the Pats the 3-2 on a tip. In the 3rd the Pats held off the Raiders and then Jake Leschyshyn scored into an empty net to make it 4-2 and that was the final score. Jordan Hollett made 28 saves in his first start of the year and picked up the win.

Three Returnees
The Pats got the three more of the six players originally gone to NHL training camps back this week. On Tuesday, the New York Rangers re-assigned defenceman Sergey Zborovskiy to Regina. Zborovskiy is a signed prospect of the Rangers and was selected in the 3rd round of the 2015 NHL Entry Draft. On Thursday the Anaheim Ducks sent first round pick Sam Steel back to Regina. Steel appeared in one NHL pre-season game on Wednesday against the L.A. Kings. Connor Hobbs was also returned to the Pats on Thursday. The signed prospect of the Washington Capitals also played one pre-season game and picked up an assist against the Montreal Canadiens. Two players remain at NHL training camps, Adam Brooks (TOR) and Austin Wagner (LAK).

Bucking the Trend
The Pats are off to their best start in five years after picking up three of four points on opening weekend. In 2015/16 the club won one game against Moose Jaw but in the three previous years came up empty, going 0-2-0-0. You have to go back to 2011/12 to find a better opening weekend when the Pats went two and oh against the Swift Current Broncos. In the last 10 years, only two times did the Pats pick up four points in their first two games.

Buziak Again!
Pats forward Braydon Buziak is off to a great start to his WHL career. The 18-year-old from Battleford, Saskatchewan has goals in each of his first two games in the league. On Friday last week he scored the game tying goal in the 3rd to force overtime against the Raiders and then scored the eventual game winner the next night in Prince Albert.