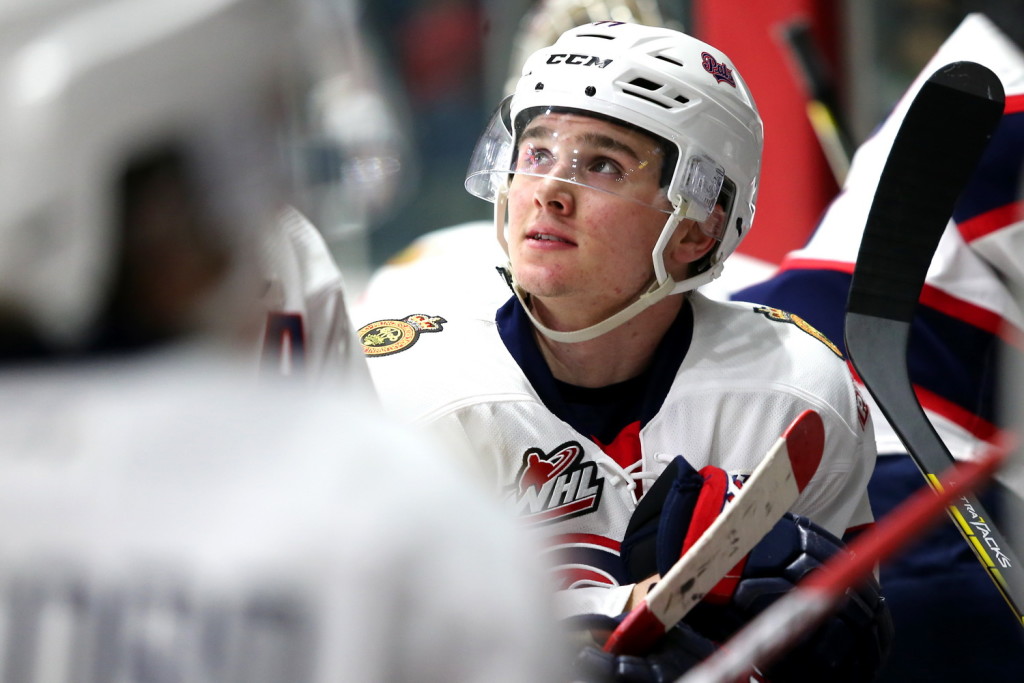 Regina, Saskatchewan – The Regina Pats Hockey Club announced its individual award winners ahead of the final home game of the season against the Swift Current Broncos.  The Pats presented ten awards recognizing the individual accomplishments of members of the team.

Player of the Year – Adam Brooks
After leading the Pats in scoring last season, Adam Brooks exploded offensively for the second year in a row.  He quickly eclipsed his 2014-15 point totals and, to date, leads the league in scoring with 115 points.  Not just an offensive threat, Brooks is also tied for 7th in the league with a +41 plus/minus rating.  Brooks has been involved in 49.1% of Pats goals heading into the final weekend.  The Winnipeg, MB native took home WHL Player of the Week honours twice this season.
2014-15 Award Winner: Colby Williams

Charles Johnston Memorial Top Defenceman – Connor Hobbs
Connor Hobbs’ first full season with the Pats has been an impressive one.  With Colby Williams out of the lineup, the Washington Capitals prospect was called on to log even more minutes than initially expected.  Hobbs reached the 40 point plateau for the first time in his career while scoring 18 goals, ranking him fourth among WHL defenders in that category.
2014-15 Award Winner: Colby Williams

Rick Rypien Memorial Award (Unsung Hero) – Jared Freadrich
In his rookie season, Jared Freadrich battled his way into more ice time in the second half of the season.  In addition to providing more defensive depth for the Pats, Freadrich also found his offensive stride.  In 56 games, the Camrose, AB native has 20 points and is just the fourth Pats rookie defender to reach that mark in the last decade.  Freadrich was also voted by fans to be the Pats’ Royer Hardest Working Player.
2014-15 Award Winner: Patrick D’Amico

Nick Papas Rookie of the Year – Lane Zablocki
Leading Pats rookies in scoring most of the season, Lane Zablocki has been a versatile player throughout the Pats lineup.  Lately the 17 year old has found a home on a line with Adam Brooks and Austin Wagner and has nine points in his last seven games.  That run has his total up to 37 points (18G, 19A) which is 16th among WHL rookies.
2014-15 Award Winner: Sam Steel

Hub Bishop Most Sportsmanlike – Sam Steel
Sam Steel’s second season in the WHL saw the skilled forward surpass his rookie totals and develop into a point-per-game player.  Through 70 games, Steel posted 68 points (22G, 46A).  Despite playing in almost every situation for the Pats, Steel only accumulated 18 penalty minutes throughout the season.
2014-15 Award Winner: Adam Brooks

Bill Hicke Most Popular Player – Adam Brooks
Just take a look at the lineups for autographs during post game skates to see the evidence of Adam Brooks’ popularity with fans.  The Pats’ leading scorer and interim captain ran away with the fan voting for this award.  Brooks returned the fans’ adulation with highlight reel play after highlight reel play.
2014-15 Award Winner: Daniel Wapple

Scholastic Player of the Year – Lane Zablocki
As a young player in the league, school is as much a part of life as hockey.  Striking the balance between book work and life at the rink isn’t an easy one.  In his rookie season, Lane Zablocki put together a strong campaign on the ice as evidenced by his Rookie of the Year nod.  While doing that he maintained an 88 grade average throughout the school year.
2014-15 Award Winner: Luc Smith

Torchey Schell Top Scorer Award – Adam Brooks
After wrapping up this award in the final week of the season last year, it isn’t even close this go-round.  Brooks leads his nearest Pats challenger by over 40 points.  Brooks put together two massive point streaks this season with 18 and 15 game runs which were first and third in the league respectively.
2014-15 Award Winner: Adam Brooks

Three Star Award – Adam Brooks
The Pats’ leading scorer was named a star in 23 games this season including an impressive nine first-star performances.  Brooks was a full 12 ‘star points’ clear of Tyler Brown who captured the second most points.  Sam Steel rounds out the top three with 21 points on the season.
2014-15 Award Winner: Daniel Wapple

About the Pats
Named for the Princess Patricia’s Canadian Light Infantry, the Western Hockey League’s Regina Pats are the oldest major junior hockey franchise in the world operating from its original location.  Since their founding in 1917, the Pats have won three Memorial Cup championships and compete in the WHL’s Eastern Division.  To learn more about the Pats, call 306-337-1535 or visit www.reginapats.com.