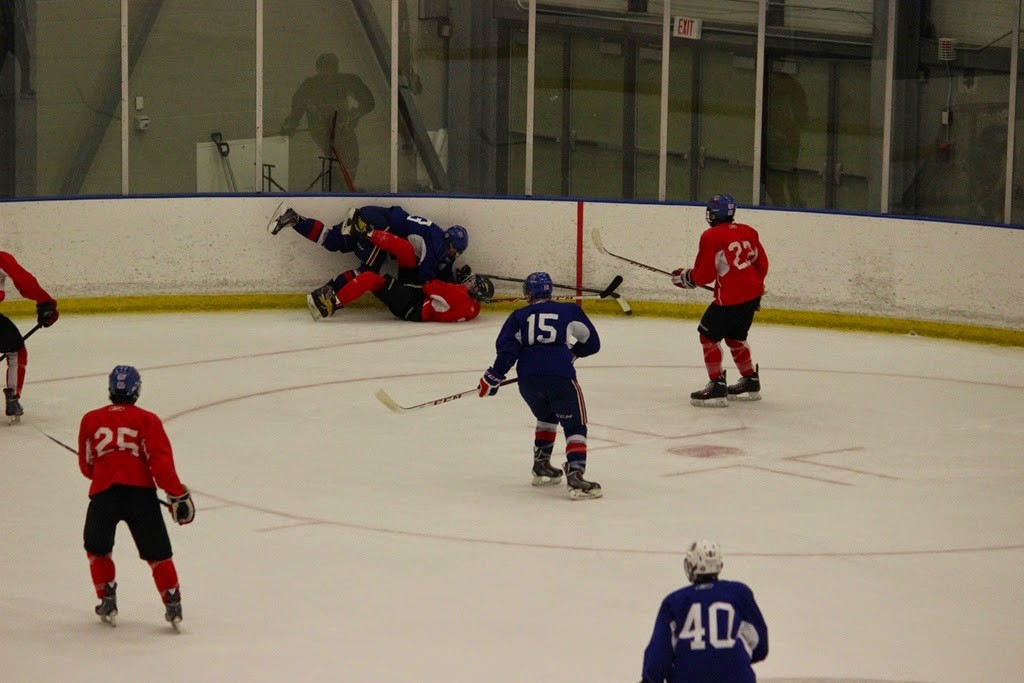 Regina, Saskatchewan – The third day of Regina Pats Training Camp saw Main Camp swing into full gear.  The Pats carried 21 players from Rookie Camp into Main Camp to create three teams (Blue, White and Red) that all saw action, each playing in two of three scrimmages throughout the day.

The first contest saw Team White faceoff with Team Blue in a low scoring affair.  Through the first half of the scrimmage goaltenders Dawson MacAuley (Blue) and Tyler Fuhr (White) held the opposition scoreless.  White opened the scoring when defenceman Chase Harrison let a shot go from the point that beat MacAuley.  Blue found a response from Scott Gall to square things up shortly after.  The winning goal came off the stick of Connor Gay when the returning Pat got some room and snapped a wrister to the back of the Blue net.  Team Blue emptied their net, but couldn’t find an equalizer, falling 2-1.

Pats over-age forward Braden Christoffer feels a need to step up and raise his level of leadership to fill the voids left by experienced players who departed in the off-season and is excited to work with the new coaching staff.

“There are some gaps to fill with Chandler (Stephenson), Dyson (Stevenson) and the other guys who have left us.  Some of us will have to step up a little more.  To see the coaching staff we have, it’s amazing to see the amount of talent and experience they bring.”

Team Red was up next against a less rested Team Blue and took advantage, posting a 7-2 victory.  Blue opened the scoring off the stick of 2014 Draft pick Gary Haden, but Austin Wagner and Patrick D’Amico put Red up 2-1 heading to the break.  The second half belonged to Team Red.  Owen Sillinger and Logan McVeigh both notched two goals in the half with Arthur Miller scoring once.  Team Blue’s lone marker in the second came from Maximilian Kammerer who scored on a slick move to the net.

Kammerer, entering his second season in North America, feels his experiences at the World U18 Championships over the off-season helped boost his development.

“It was great to play at the (U18) World Championships with Team Germany; it was a good tournament for me.  I played well and after that I started the off-season and worked very hard.  Now I hope to be a big part of this team.”

Team White and Team Red wrapped up the day with a high scoring 8-5 contest.  Connor Gay started the scoring with a hard wrist shot, but Team Red rolled back with three unanswered as Owen Sillinger picked up his third of the day with James Hilsendager and Darcy DeRoose adding tallies.  White didn’t go away, scoring a trifecta of their own with Rykr Cole, Braden Christoffer and Sam Steel replying to make the count 4-3 in White’s favour at the break.  The goals were plentiful in the second half with Gay and Christoffer getting their seconds with Tyler Pickett and Jimmy Lambert singles.  Kyle Westeringh and Dane Schioler tallied for Red.

Scrimmages resume Sunday morning at 10:00 a.m. at the Cooperators Centre.