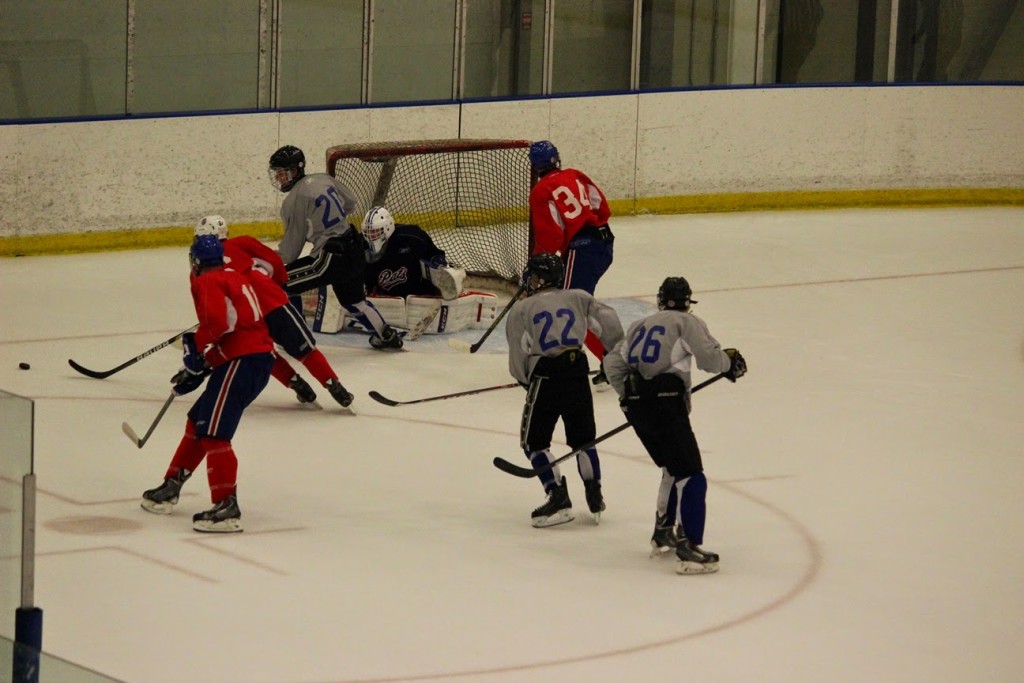 Regina, Saskatchewan – The Regina Pats Hockey Club opened the 2014 edition of Training Camp with the rookies (’97-’98 born players) taking to the ice in the morning for a pair of practice sessions.  The brief skates gave the players an opportunity to get familiar with their teammates for the next couple days as scrimmages would commence in the afternoon.

The Pats’ top draft pick from the 2014 Bantam Draft, goaltender Jordan Hollett, was feeling more at ease in Pats colours than his first visit for Spring Camp earlier in the year.

“It was so exciting the first time.  This time you’re a little more relaxed so you’re able to relax yourself and have a better practice,” said the 13th Overall pick from this year’s draft.

After a break, the teams converged for the first scrimmage of camp.  The first goal honours went to Regina product Riley Woods who slid home a powerplay marker in the first 30 minute run-time half.  With Team Red holding the one goal lead, Team Grey’s top scoring line went to work as 2013 2nd Overall pick, Sam Steel, would record three points in the second frame and fellow roster hopeful Jacob Elmer recorded two points as Team Grey battled to the 3-2 victory.  2013 8th Round pick Brady Third picked up Red’s second marker in the loss.

The evening scrimmage once again went in favour of Team Grey with a more balanced scoring attack.  Five goals from four different scorers found their way into the Red net.  Damian Bentz led with a pair while Jacob Elmer, Chase Goods and Gary Haden made up the rest of the scoring.  Emerald Park’s Eamon Milligan had the hot stick for Red, tallying twice in the 5-2 defeat.

Pats Head Coach and Senior VP of Hockey Operations John Paddock was impressed with the players looking to make the jump to Major Junior in their first year of eligibility.

“It bodes well for the future; there are some good 16 year old players here.  There will be a group of them who move over and they’ll intertwine with the veteran, older players and we’ll see who steps up, picks up the pace or who maintains it.”

The Regina Pats 2014 Training Camp resumes with Team Grey and Team Red clashing again at 10:00 a.m., Friday, at the Cooperators Centre.  The 1997-1994 born players register in the afternoon and hit the ice for their first practices starting at 5:00 p.m.